You can download the file above or read online. See below 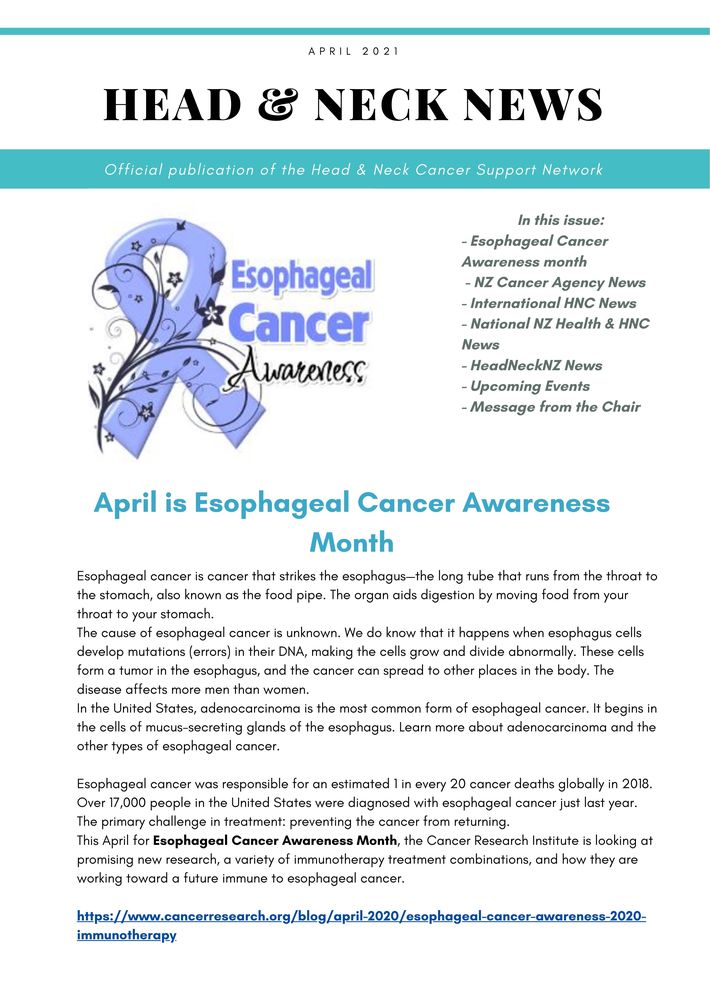 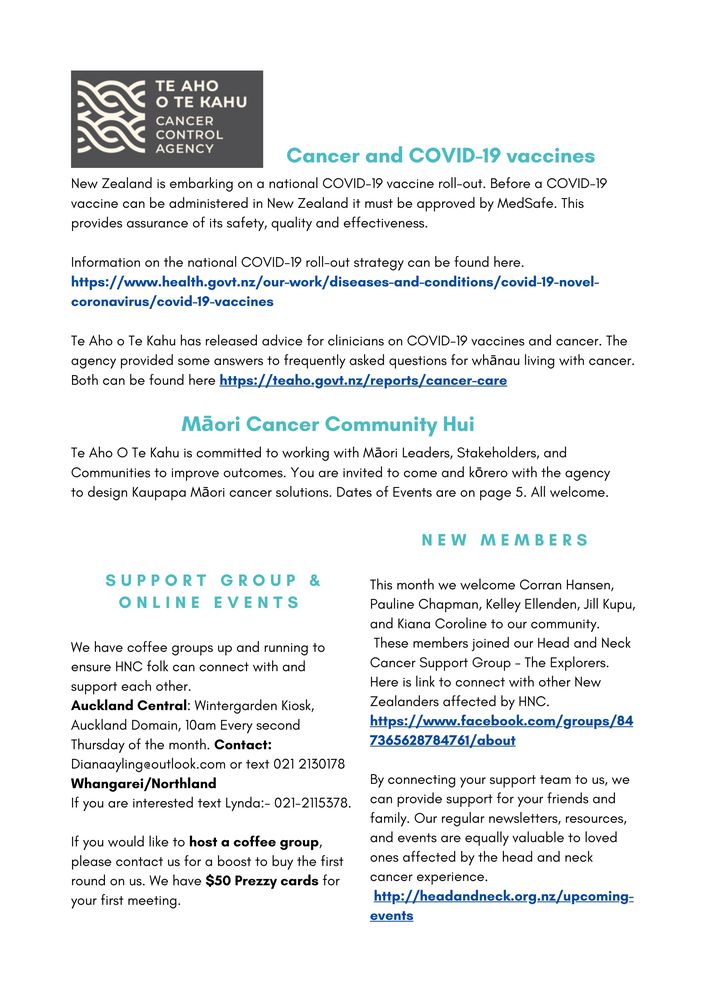 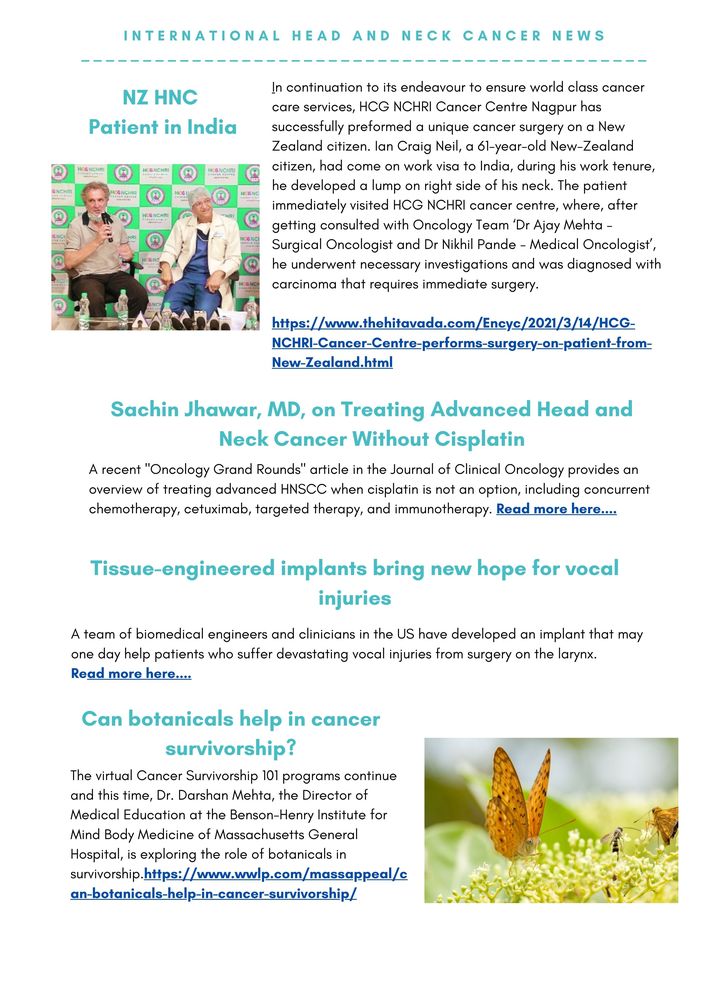 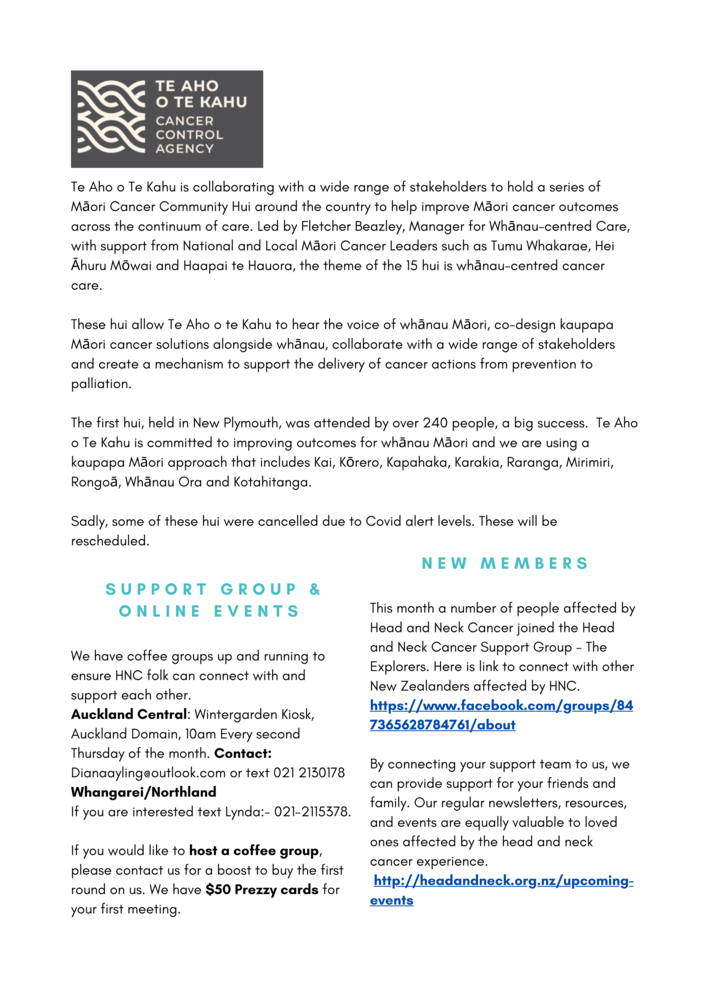 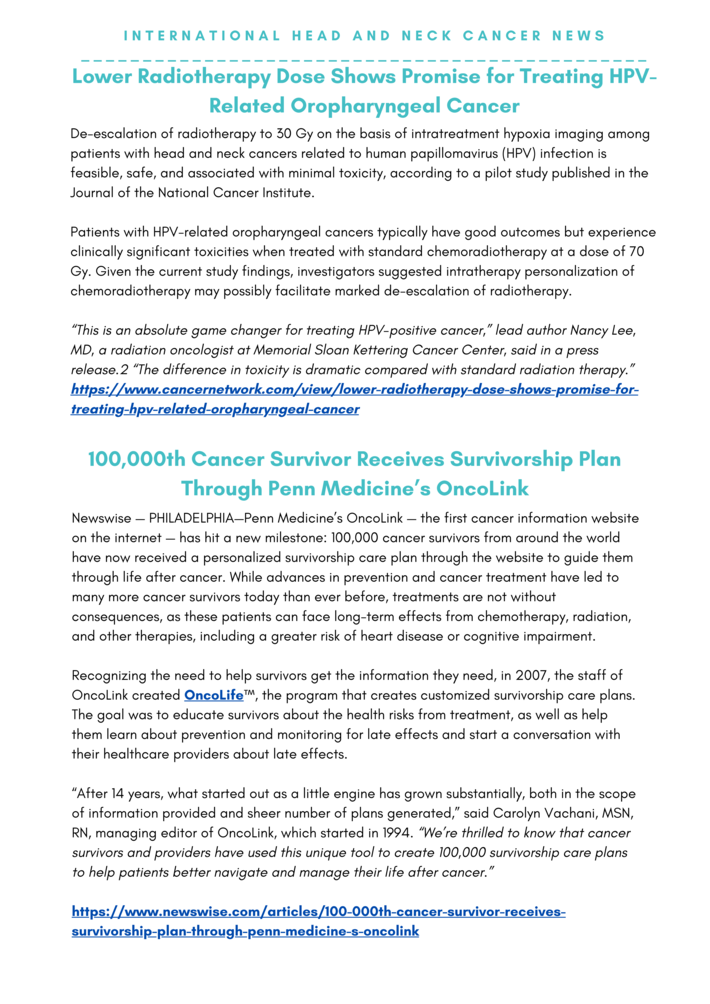 Melbourne may be in locked down but the desire to help head and neckers remains strong.

Hosted by Austin Health, Melbourne in partnership with

A Symphony of Stories

This is a free on line event but registration is required

Please Register via this link;

Please forward this invitation to others. 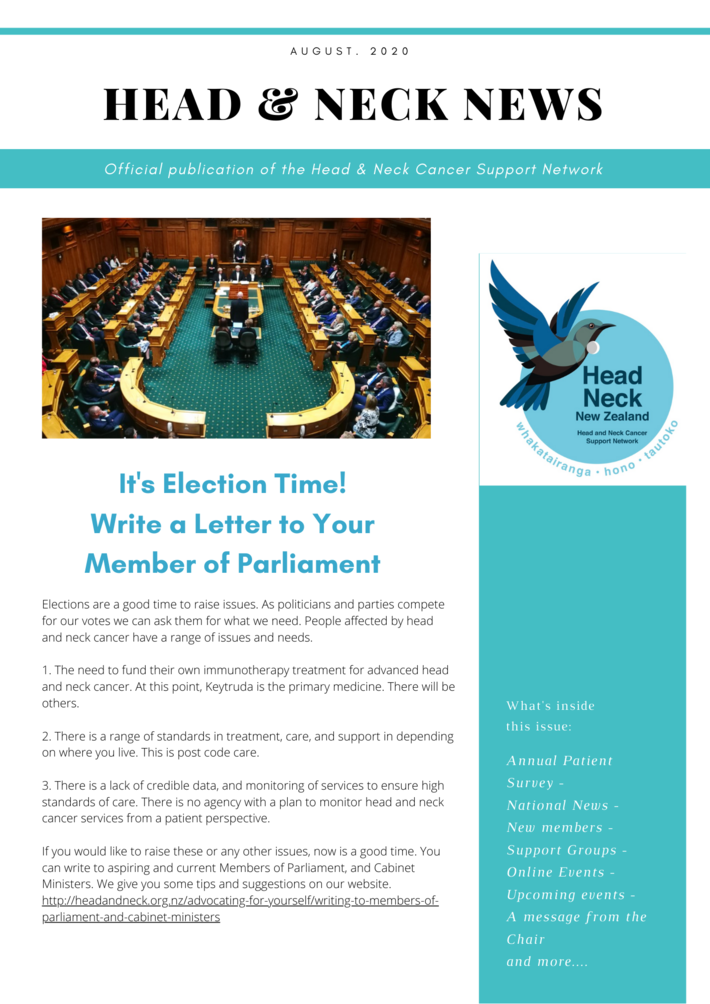 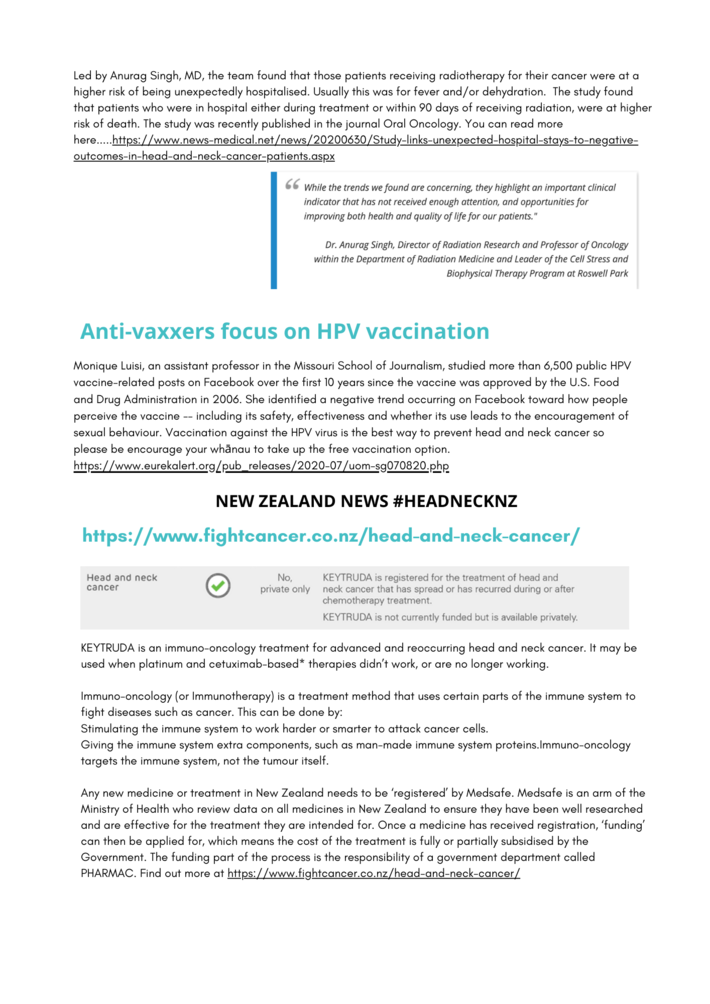 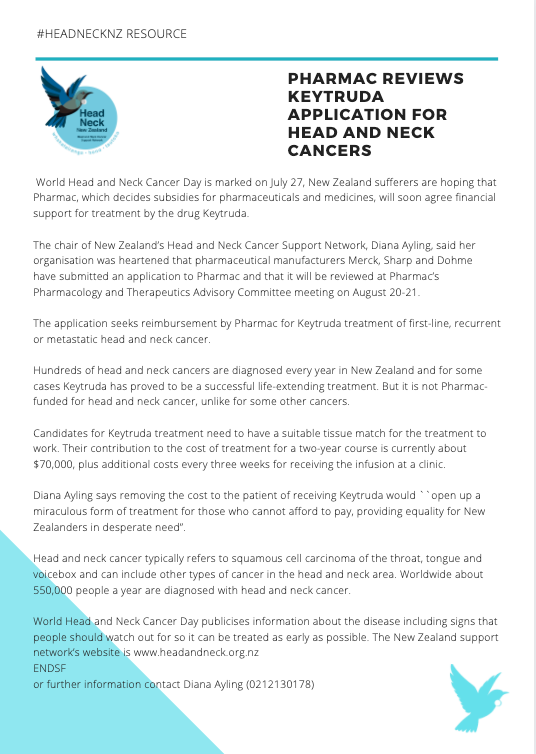 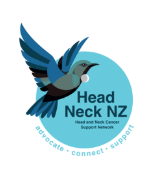 This week they have released their updated New Zealand Cancer Action Plan, David saying it better reflects the voices of people whose lives are ...

The detection of circulating tumor DNA (ctDNA) in human papillomavirus (HPV) with an experimental blood test has been associated with high positive ...

New Zealand Doctor Online
"The updated New Zealand Cancer Action Plan 2019-2029, which was published yesterday, clearly outlines what we need to do for the future, ...

People with advanced head and neck cancers have a low survival rate and current treatment options such as surgery, radiation and chemotherapy ...
Read more…

The Committee is meeting 12 February 2020 and will review the Network's written submission. They will decide whether there is value in speaking with our representatives.

A Rare Disorder Medicine is Funded by Pharmac

After years of campaigning by Kiwi families affected by cystic fibrosis, Pharmac has finally announced plans to fund "breakthrough" drug Kalydeco. It is the first medication that fixes the underlying cystic fibrosis defect, essentially turning off cystic fibrosis for patients with the G551D mutation. Until now, New Zealand has been the only OECD country to not fund Kalydeco, with many patients considering a shift to Australia to gain access to it. Here's our full story from last night's newscast.

An Auckland cancer sufferer, who gifted sunflowers from his front lawn to try raise $100,000 in donations to fund the anti-cancer drug Keytruda, has died.

A Thames man is sharing his experience with cancer drug Keytruda in the hope it will help his children and other New Zealand families.

Sixty-three-year-old Steve Wilson says his life was saved after he paid $100,000 out of his own pocket to receive Keytruda treatment.

Now he wants it made accessible through funding from Pharmac for a number of other cancers including the one he had.

An Auckland woman has revealed that the advice she was given from a US doctor in a Facebook group saved her life — after being told she only had months to live.

In 2018, Diana Craig was diagnosed with oropharyngeal (throat) cancer that spread to the lymph nodes in her neck.

After the 52-year-old underwent two radical surgeries, one that was life-changing that left her swallowing and eating compromised, and radiation, doctors told her the cancer had gone.

Miracle drug' Keytruda approved for use earlier in melanoma treatment Mr Mulholland, whose wife Wiki has terminal cancer, is calling for the doubling of funding to Pharmac.

He said patients with a raft of health issues, ranging from cancer to mental health, are being forced to "beg for their lives" when it comes to accessing the latest and most suitable drugs.

At a packed meeting attended by patients and more than 30 advocacy organisations, Patient Voice Aotearoa launched a new campaign called All I Want For Christmas Is To Live.

Five Steps to a New Normal: Life After Cancer

Hearing the words “you have cancer” was devastating. It was a life-altering diagnosis that caused time to stand still. But once a plan was established and the treatment began, the fear and unknowns morphed into empowerment. My medical team kept a close eye over everything I did and it was comforting to know that I wasn’t facing this alone.

But once active treatment ended and my calendar went from being filled with appointments to a light schedule of check-ins, the anxiety and fear once again emerged. “You’re cancer-free,” said my doctor, and life was supposed to move on. While everyone around me was celebrating, I once again felt alone and afraid of this new unknown.