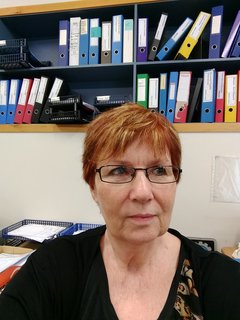 Today's story comes from South Island member, Heather Anderson, who like another three of our members has a rarer form of HNC, adenoid cystic carcinoma.

ACC (Adenoid Cystic Carcinoma) is a rare and unique form of cancer that is known to be unpredictable in nature, with a typical growth pattern of being slow and gradual, but over time can be progressive, insidious and relentless. There are some general tendencies, such as the propensity for it to spread into surrounding nerve tissue or metastasize to other areas of the body, yet each patient can experience their own diverse patterns and issues.

ACC occurs most commonly in the oral cavity with 58% of the primary tumors beginning in that area, but it can actually occur in as many as 38 different organs in the body. It is commonly considered to be a salivary gland tumor and grouped with other oral cancers in statistical studies since it occurs predominantly in that area.

The oral area includes the major and minor salivary glands, roof of mouth (palate), floor of mouth, gums, tongue, pharynx and lips. Though it is often considered to be a salivary gland tumor, ACC actually occurs in the broader grouping of all types of secretory glands (glands that secrete fluids) including tear glands, sweat glands, mucus and excretory glands.

Upon initial diagnosis it is most often a single tumor that is located within a primary organ and in about 5% to 10% of the cases can include spread into lymph nodes. In a limited number of cases it may have already spread into adjoining areas through nerve invasion or metastasized to the lungs, liver or bone as well. This takes place most often when it has been misdiagnosed for years.  (Adenoid Cystic Carcinoma Organization International – www.accoi.org)

I have previously made comments about the struggle those of us with this type of cancer face but when I sit down to write this I feel inadequate to the task – to write for me is to put my heart and my soul on the page …. There are no half measures in this process and so it is raw and extremely difficult.  It is worse for others and so I will try my best to do our situation justice – forgive me if I am remiss.

My diagnosis was in April 2007 …. That was my first surgery which I forced upon my surgeon, much to his disgust, as he was adamant that it was “only a cyst”!  In his defence all tests had shown up negative for anything nasty.

What he didn’t know was that he was not only fighting my conviction that I wanted it out! But also a visit in the middle of the night by my dear mother (departed from this world when I was 9) who gave me one word and one word only “Cancer”.  Now I was always taught – listen to your Mother and that is what I was going to do. I would not normally stand up to a surgeon but this time I did because I feared my mother’s wrath more than that of the surgeon. Well let’s just say when the results came back I did feel rather vindicated and not at all surprised.

The surprise came later when a good friend with a PhD in Microbiology, who worked at Peter Mac Cancer Hospital and a had penchant for research, did the hard yards for me.  That was a very interesting “coffee with a friend” sitting at a quiet café in Melbourne central. I remember bits of this conversation - 80% of us will survive for the first 5 years, the next 10 years 40% will survive, the next 10 years 40% and so on.  Basically the longer you live the more likely it will return.

With that return comes one of the most painful cancers because it can travel peri-neurally ….. once nerve involvement is in place there is very little that can be done, and as some can tell you already the pain is excruciating with the medication being debilitating.  I was lucky – my determination and having private health cover meant I got the surgery I needed. I am constantly reading comment after comment not only here in NZ but overseas of people who were not so lucky. I recently read of a four month old diagnosed. ☹

Best treatment – surgery and radiation ….. one of our members was misdiagnosed to the degree that she is not able to have surgery.  Some are offered chemo but this is often a guinea pig type move as there is no supporting data to show it is beneficial. That said every Warrior is different and reacts differently.  Currently they are looking at combinations of chemo drugs and there may be some hope with immunotherapy.

My surgeon’s words to me have stuck ….. go away and research it and come back to me with your questions (which by the way he couldn’t answer) and ……. Go and live your life.   The last words at the time I felt were insensitive and not terribly helpful but as I have now come to realise they were profound and he wasn’t the last doctor to say that to me.

ACC diagnosis comes with it a sentence …. A life limiting sentence ….. Though I have not talked with all of the ACC people in New Zealand that we have found, those who I have spoken to were all misdiagnosed and as such the one and only life extending treatment that could be given (surgery) was delayed.  I believe I am the only one that actually got the surgery early enough even that won’t be completely “early enough” as I am getting signs and symptoms in the past year that would indicate to me that it is returning but this time there is “no protocol” for any diagnosis let alone treatment in New Zealand.

This “no protocol”, also read “palliative care”, treatment is demoralising as it treats you as if you are already in the pine box and of no further use to the world….This I deny strenuously.  As such we must look not only to find those medicos in New Zealand who will treat us as human and allow us the dignity of being able to keep fighting and/or we hunt down the alternatives …. The research trials, the alternative therapies – no longer do we have the luxury to stay within the confines of the New Zealand Health Board system.  We must venture out and put our toes in the water and try these different avenues even if they don’t work we have at least tried ….. if we try and we fail then someone following us will know that is not a good avenue and will try something else.

This is the same for all rare diseases no matter what they are. “Rare” by definition immediately means there is little information, interest or protocol. Because our type of cancer is not restricted to a particular part of the body some of our Warriors do not meet the criteria for our HNC group – to this end we have set up a Facebook group to try and gather together and support all those who are dealing with ACC.

If we Try then we have Hope.  Believe!

Posted by Head and Neck Network We have gathered stories from all over the world to share information, and give hope.